The Flintstones: Fact or Fiction?

Matt, from Experience the Iron Age, came and spent a fantastic day with us; sharing his knowledge about tools, weapons, clothing, homes and much much more. 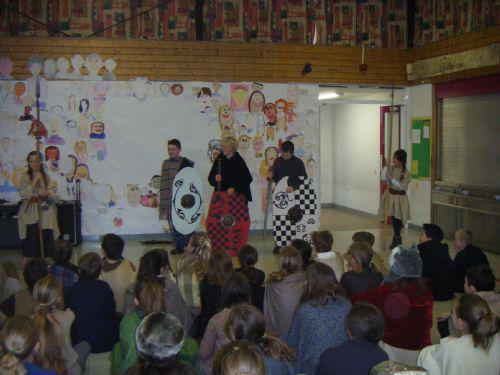 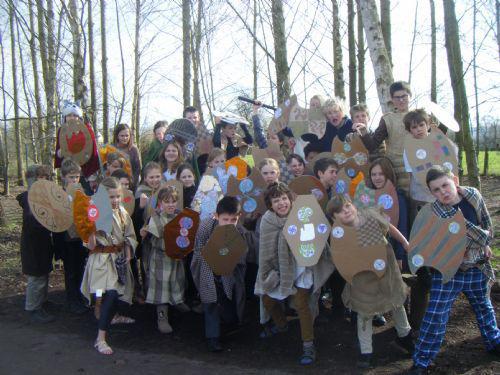 On Friday, the seventh of February, Eagles and Falcons joined together to explore Cheddar Gorge.  Our ancestors might have lived in one of the caves here!  We had an exciting and adventurous trip around the caves and museum.

We climbed the 274 steps to the top of Jacob's Ladder.

At first we travelled back in time to explore Gough’s Cave.  This was the biggest cave but we didn’t get to explore it all because of a flood.  As we plodded through the cave we discovered more and more cave paintings, they were either out of gruesome blood, mud, ash painted charcoal or chalk.  This cave was discovered in 1894 by Richard Gough and his two sons, Albert and William.

In the cave there was also one of the most famous caveman bones in England because it was the oldest (9000 years old), most complete set of bones in Britain.  People believe he died from a bang on the head, a REALLY big wound.

When I got inside I noticed it was covered in animal skin (I didn’t think it was real but it was).  Esther passed around weapons, animal skins, skulls and bones.  Whilst touching the skull, I felt a shiver down my spine because it had once been living.  The next thing she told us was really interesting, apparently the cavemen chased their prey over a cliff so it falls down and then the next part of the plan kicks in.  All the other cavemen at the bottom of the cliff would wait for the animal to fall down and then they would bring their catch back to the cave.  After that Esther bought us outside so she could show us how to make a fire.  Unfortunately, our fire didn’t work.

To conclude, the Stone Age was probably quite challenging, especially to try and hunt food, but it would have been quite fun too!  You would have had to be quite careful in the two mile deep snow during the Ice Age.  It was really good fun going to Cheddar Gorge for the day, especially learning all the amazing facts.

A cave has appeared in the corner of our classroom and every now and then a strange beast, who is usually wearing socks, emerges!

We launched our new project by becoming 'hunter-gatherers' and trying to identify twigs, fungi, animal tracks and poo along the Strawberry Line.  During the afternoon we built natural shelters and persevered with lighting fires.


Today we travelled back in time to the Stone Age.  It all started with a boring old game of Chinese Whispers.  Billy cleared his throat and shouted a whole load of gobbledygook making us all laugh hysterically like any old game of Chinese Whispers but then something strange started to happen.  Everyone stopped laughing ….. Obviously they could feel it too ….. A strange tingling sensation started spreading up my body.  It was a pleasant sensation but unnerving to, I looked around wondering what to do.
By Issy P


After that us hunter-gatherers hiked down the overgrown wilderness of the Strawberry Line to hunt for food and shelter.  We found our food by looking at poo and tracks of any animals but to find our shelter we identified what twigs would be best to use and keep us safe.  It felt good being a hunter-gatherer.
By Harlow


When we’d finished lunch (which was not, I can assure you, a caveman one!) we were back into the wonderful world of nature.  We flickered between animals in a game of Mammoths, Mice & Men – it was amazing to learn how huge, overwhelming creatures like mammoths are scared of tiny rodents like mice – in the splashes of rain dampening the many layers of waterproofs we had on.
By Catherine


Later on it was approaching dark so we made a natural shelter.  Ours was very cosy and it protected us all very well.  In our shelter we were all getting cold so we decided to make a fire.  Quick as a flash I set up the beginning of the fire.  Our fire took a while to start but when it did, it was an exquisite sight to see.
By Dylan


When we got the fire going the flames dazzled like the sun.  It was amazing.  That day was great and went by speedily because I was having fun.  I felt wet but excited and happy all the way through.
By Issy J


Finally, after the storm had died down, we sat around a huge fire to reflect on our day in the past.  We had to choose something that summed up our day.  I chose a stick as we were scavenging for them, using them for a fire and our dens.  Suddenly we were transported back to the present.
By Amy
Top
Cookie information
Cookie Notice